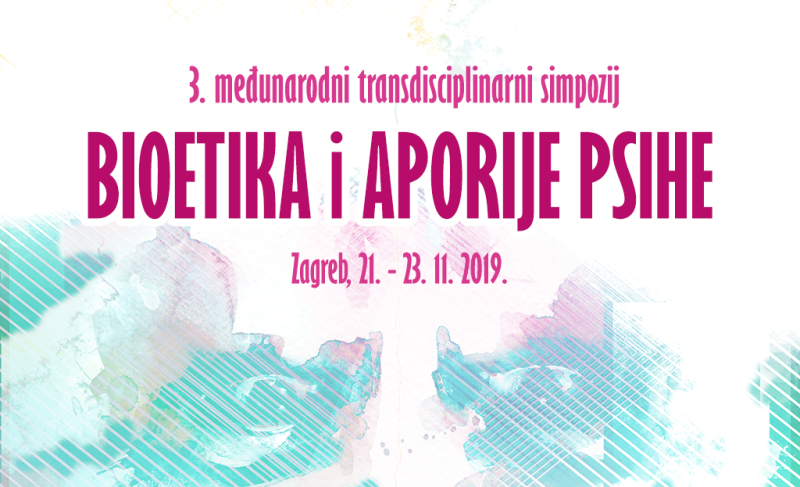 During this year’s Symposium on Bioethic and Aporia of Psych, special attention was focused on the issue of destigmatization of persons with mental disorders and other members of socially vulnerable groups. The choice of presentations presented at the symposium focused on those whose authors approached the interdisciplinary analysis of their topics. For this reason, presentations related to the above mentioned social groupings were presented and discussed by experts from various social and humanistic disciplines, as well as from the field of medicine and members from civil society associations. This three-day symposium, held in Zagreb from 21 to 23 November 2019 at the premises of the Center for Integrative Bioethics and the Faculty of Philosophy, had an international dimension as experts from abroad gathered there. For example, plenary lectures were Francesca Brencio (Italy), Anders Lindseth (Norway), Danijela Tiosavljevic (Serbia) Demetrius A. Franca (Brazil) Damir Smiljanic (Serbia) and Theodor Itten (Switzerland). Exhibitors included colleagues from Slovenia, Romania, and Bulgaria. The symposium was organized by the University Center for Integrative Bioethics of the University of Zagreb and the Center for Integrative Bioethics, Faculty of Humanities and Social Sciences, University of Zagreb within the Scientific Center of Excellence for Integrative Bioethics, Croatian Institute of Public Health, Croatian Bioethical Society, Association Ludruga, Croatian Philosophical Society and the project “Zoom to the psyche”.

At the symposium, researcher, Dr. Jelena Seferović, presented the results of the previous research of patient files of mothers with mental disorders who were hospitalized at the Neuropsychiatric Hospital Dr. Ivan Barbot Popovača during World War II and its aftermath. She contextualized the collected data in relation to the results of her research conducted during her doctoral studies as part of her work on the constructions of gender identity among female residents in homes for adults with mental illness. Her paper entitled Challenges of Motherhood of Women with Mental Disorders in Continental Croatia. A Look back will be formulated into a complete scientific article and will be submitted for publication to Synthesis philosophica, an international scientific journal of the Croatian Philosophical Society whose articles are referenced in citation databases, such as SCOPUS, A & HCI, ERIH PLUS, SocINDEX, LLBA etc.

CHALLENGES OF MOTHERHOOD OF WOMEN WITH MENTAL DISORDERS IN CONTINENTAL CROATIA. A LOOK BACK

Looking back in the context of this presentation presupposes a cultural anthropological analysis of some fragments from the history of motherhood of women with mental disorders from continental Croatia. This refers primarily to the period from 1941 to 1950, the time from which the analyzed personal documentation of female patients hospitalized at NPB dr. Ivan Barbot Popovača dates. Gender roles of the mother of women with mental disorders during the second half of the 20th century will be considered on the basis of interviews conducted with female residents of four homes for mentally ill adults located in northwestern Croatia. The aforementioned interview researcher Jelena Seferović conducted for the purpose of writing her own doctoral dissertation and the archival research of female patient files she did as a member of this project team in the State archive in Sisak. The presentation will show representative cases related to the motherhood experience of the latter, separated from a larger corpus of collected research material. From the analysis of the same, it was evident that the considered women with mental disorders were often unable to fulfill the traditional expectations regarding the role of the mother. Not fully satisfying the social demands of motherhood is presumed to have in part contributed to their social and emotional (self)isolation. Also, it turned out that, after all, their children were often taken to different social care institutions and treated in psychiatric hospitals. Therefore particular attention will be paid to looking at the generational perpetuation of the institutionalization of women with mental disorders and their children in the above-mentioned institutions.

**Photos published with permission from Moslavina Museum in Kutina.