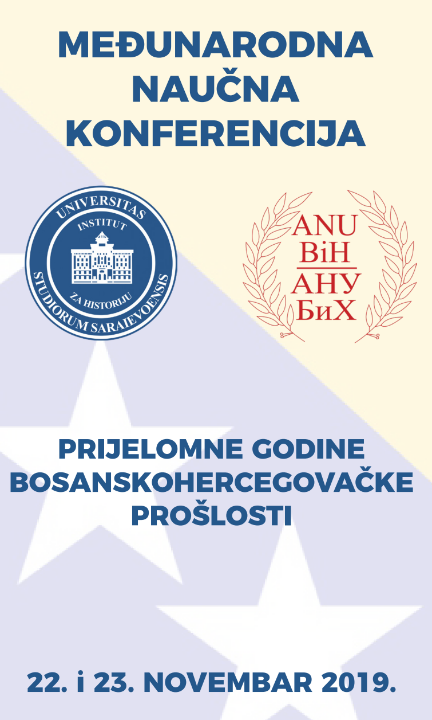 On November 22, 2019, on the International Scientific Conference “Turning points in Bosnian and Herzegovina’s past”, which was held at the Academy of Sciences and Arts of Bosnia and Herzegovina in Sarajevo, a paper of researcher dr. Jelena Seferović was presented. The conference was organized to mark the 60th anniversary of the Institute of History of the University of Sarajevo. There were presented the results of her several months’ research on the history of the “Station for people with mental disorders” of Vakuf Hospital in Sarajevo. The conference brought together numerous domestic and foreign scientists who will discuss relevant issues about BiH’s past. In this regard, our colleague’s presentation entitled “The Beginnings of Psychiatric Care in Bosnia and Herzegovina: An Example of a Sarajevo “Station for people with mental disorders,” will be a valuable contribution to a better understanding of the historical development of the institutionalization of persons with mental disorders in this country.

BEGINNINGS OF PSYCHIATRIC CARE IN BOSNIA AND HERZEGOVINA: AN EXAMPLE OF A SARAJEVO’S “STATION FOR PEOPLE WITH MENTAL DISORDERS”

The focus of the paper is an analysis of the activities of Sarajevo’s “Station for people with mental disorders”, starting from its opening, at the end of the 19th to the end of the first decade of the 20th century, when it stops to operate. Stanica was the first specialized institution for the accommodation of persons with mental disorders in Bosnia and Herzegovina, but not the only one in Austria-Hungary. Therefore, her work will be contextualized in relation to the institutionalization of the latter population in other psychiatric institutions in the Monarchy and later with regard to the organization of psychiatric care in the Kingdom of Yugoslavia. Despite the fact that it was a hospital of smaller accommodation capacity, the decade and a half of the existence of this part of Sarajevo’s Vakuf Hospital played a significant role in the development of psychiatric service in the territory of the then Monarchy. The research was based on a reading of archival holdings of health institutions located in the considered geographical area, the material of which dates from the late 19th and early 20th centuries. In addition, it relied on the content of newspaper articles that provided an overview of the socio-economic (in) circumstances in BiH at the time, as well as the situation within the health care system.