The scientific meeting entitled “Personalities of Slovene Medicine” was organized by RC SASA (Research Centre of the Slovenian Academy of Sciences and Arts – Research station Maribor), University library Maribor (UKM) and Medical Faculty, University in Maribor took place at Glazerjeva dvorana, UKM, on 5th of November 2019. The Institute for Cultural History, which stood behind this event already organized series of biographically conceptualized events, this time presented noteworthy medical figures, who shaped the field of medicine in Slovenia. 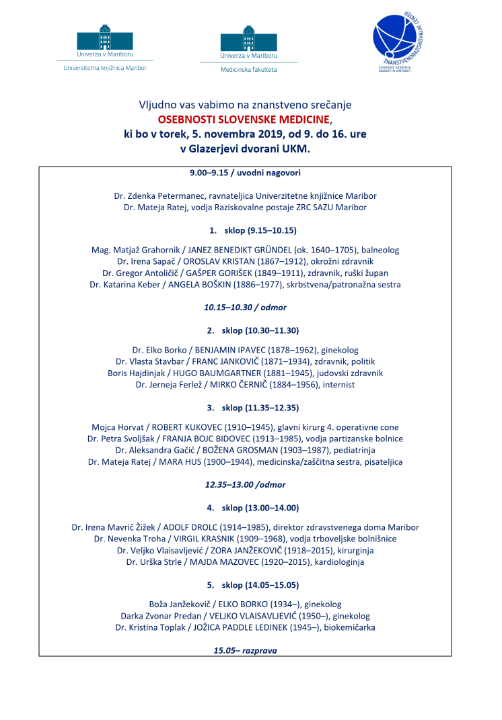 Nineteen medical doctors of both genders active since the 17th century up to today were presented at the meeting. Their positions, although framed in the Slovenian national framework, have often been international, in terms of education, occupation or influence. Often the presentation stretched far beyond their medical activities, as many among them were important intellectuals, public workers, iconic personalities. Some of them were noteworthy inventors on a world scale (like plastic surgeon Zora Janžekovič or biochemist Jožica Paddle Ledinek). Some of the presented medical figures were biographically introduced for the first time, some were evaluated anew. The event outlined some other names from the medical field, thus manifesting lacunae in both, biographic and medical historical studies.

Researcher dr. Urška Strle participated with a paper on Majda Mazovec (1920-2015), a Ljubljana-born cardiologist. After enrolling at the University of Ljubljana, which at the time only had incomplete Medical Faculty she absolved her medical studies at the University of Padua in the midst of the Second World War. In the post-war years, she specialized in cardiology and established the first Clinical Department of Cardiology within Ljubljana University Medical Centre, where she worked until her retirement. The focal point of the paper is not directed at her career and professional expertise only but seeks to explain and justify her biography by taking into account the social context of her time, her personal features and her social network. By reflecting on her life path, it becomes clear that cardiology fundamentally determined her personal life, and vice versa, that her medical career cannot be explained without consideration of her beliefs and values, her life experiences, her understanding of the world and her social orientation in it. The use of the oral history record, supported by a few but diverse, mostly non-classical historical sources, was conditioned by the unusual lack of previous biographical attempts – with the exception of her fascinating Paduan episode – and blocked access to her professional medical files. By recognizing the meaning of both, revealed and silenced aspects in the available sources, Majda Mazovec’s biographical sketch considers some methodological issues as well.

Papers will be published in a scientific monograph within the framework of Biographical Studies, published at the Institute for Cultural History of the ZRC SAZU in Spring 2020.