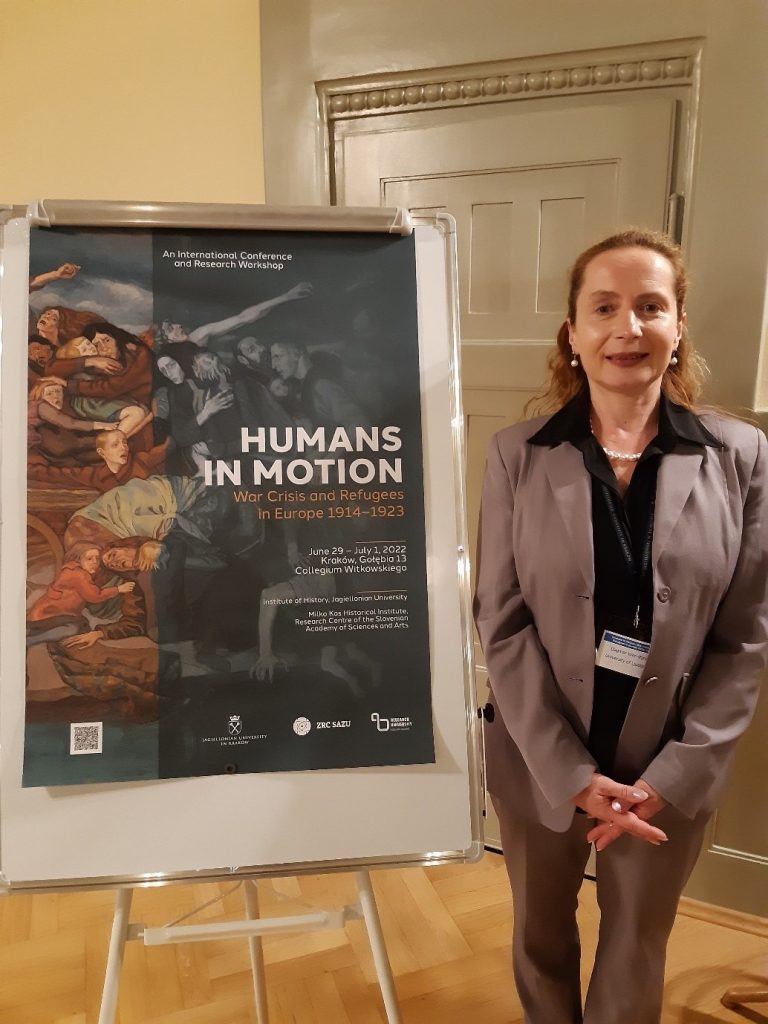 EIRENE researcher Dagmar Wernitznig delivered a live paper at the in-person international conference and research workshop ‘Humans in Motion: War Crisis and Refugees in Europe 1914–1923,’ hosted by the Institute of History at the Jagiellonian University and co-organized with the ZRC SAZU, Milko Kos Historical Institute in Ljubljana. Entitled ‘Transborder Tragedies and Transgenerational Trauma: Refugeeism and Gender in the Shatter Zones of the North-Eastern Adriatic Region during the Greater War,’ Dagmar’s presentation dealt with her study of the clinical charts of female refugees at the psychiatric ward of the Landeskrankenanstalt [province hospital] in Klagenfurt/Celovec from approximately 1918 to 1923. 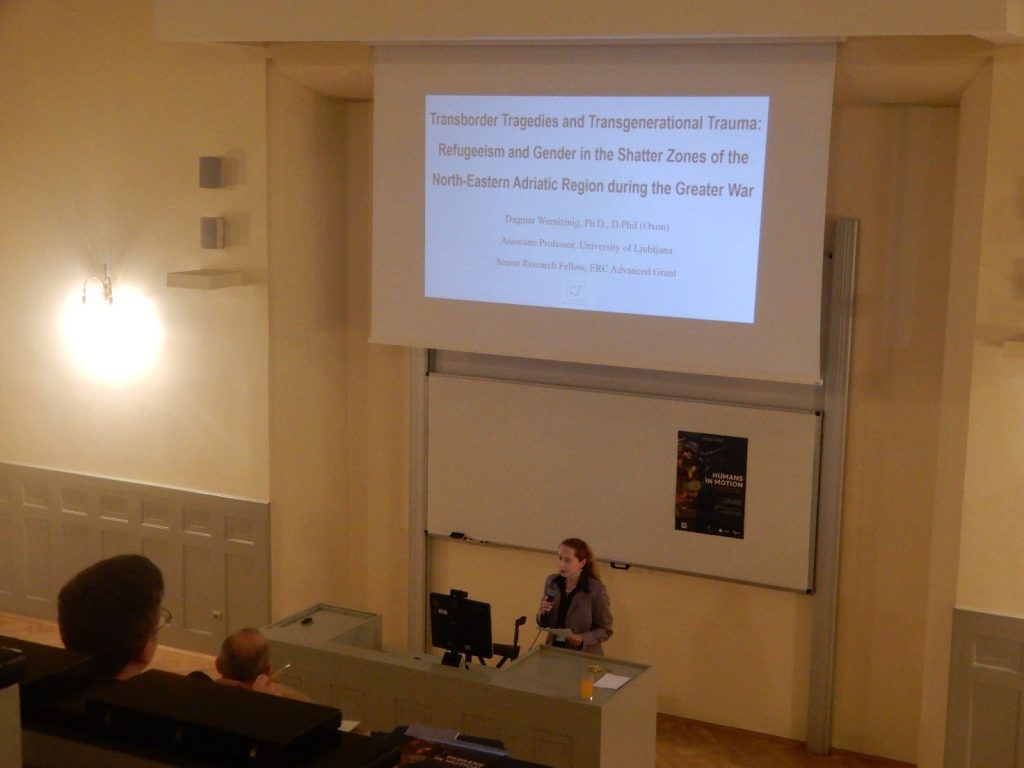 By analyzing the medical records of displaced and hospitalized women and girls, she discussed the gendered politics and narratives of patriotism, statelessness, and refugeeism in the wake of the First World War. The psychiatric files of exiled and traumatized female civilians are thus particularly helpful to illuminate socio-political connotations of military and paramilitary violence after armistices and peace treaties, amidst demobilization, reconstruction, and nation building in the young First Austrian Republic and in tandem with cultural discourses about in- as well as exclusion strategies and methods.

‘Solidarność’ in Poland of 2022: Ukrainian refugees demonstrating for their human rights on Kraków’s Rynek Główny [Central or Main Market Square] – one of the first sites globally to be declared a UNESCO World Heritage – under the bronze monument of the poet Adam Mickiewicz (1798–1855), himself also spending most of his life as an exile. 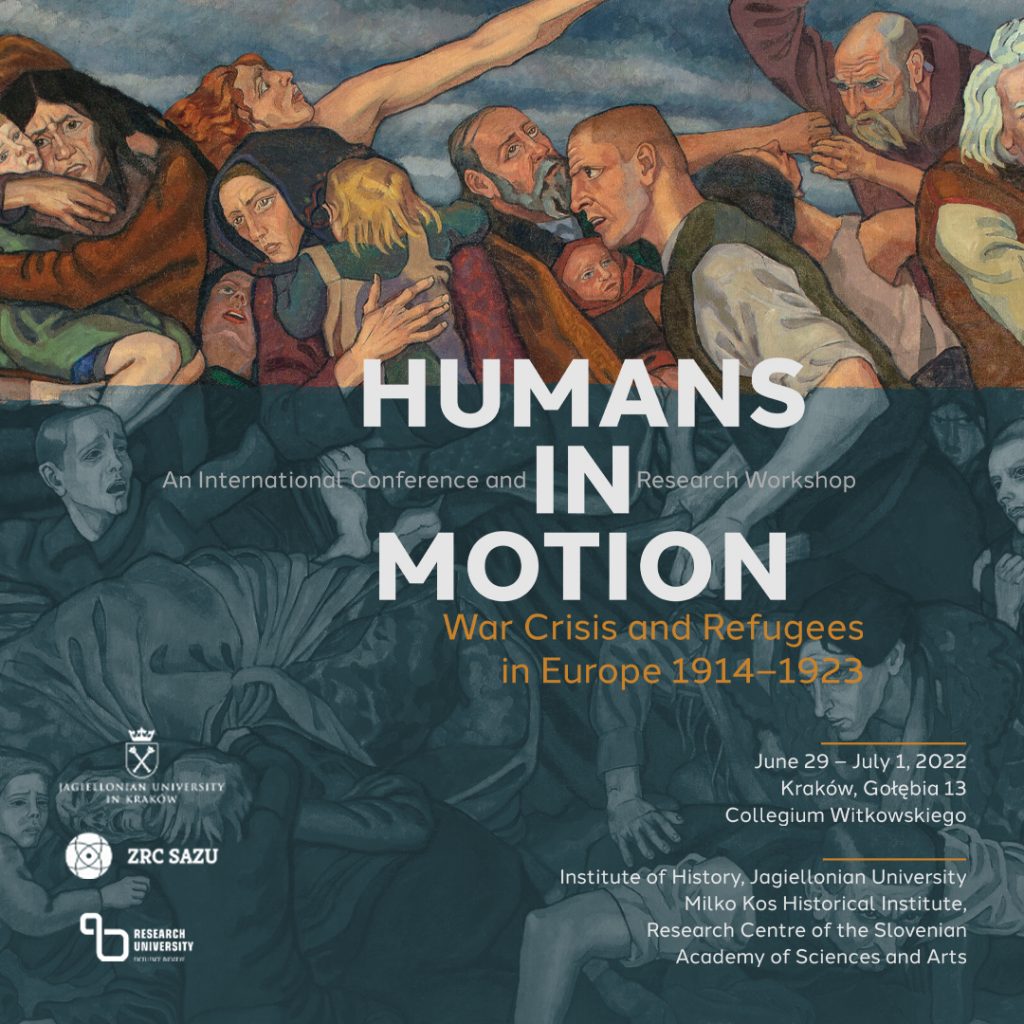 “From 29 June to 1 July 2022, the Institute of History of Jagiellonian University will host the international scientific conference “Humans in Motion: War Crisis and Refugees in Europe 1914–1923”. During this event, academics from over a dozen countries (Austria, Belgium, the Czech Republic, France, the Netherlands, Lithuania, Latvia, Germany, Norway, Poland, Slovenia, Turkey, the USA, Hungary, and the United Kingdom) will present their research and reflections on war refugees in Europe over a hundred years ago. The keynote will be delivered by Prof. Peter Gatrell (University of Manchester). This conference is part of the R2R project funded by the Research University – Excellence Initiative as part of the research group “Humans in Motion: Refugees in Europe 1914–1923″ (PI and research group coordinator: Dr. Kamil Ruszała, Jagiellonian University), implemented in partnership with the Milko Kos Historical Institute, Research Center of the Slovenian Academy of Sciences and Arts. It is an interdisciplinary and international team of experts dealing with the issues of war refugees in the first decades of the 20th century in Europe, thus engaging, integrating and stimulating debate scientists affiliated with various research centers around the world, by creating in Krakow a platform for the exchange of thoughts between scholars of various level (from PhD students, PostDoc to experienced researchers), thus showing the Jagiellonian University as a moderator of international dialogue and debates on current issues through the prism of past experiences. Research on war refugees in the past undertaken by the research group emphasizes that contemporary migration processes are not a new experience for the European continent and its inhabitants: floating borders and people in motion remain an identical but forgotten part of the past and heritage. The problems of war refugees are part of both the discourse and social awareness. Refugeedom is a great lesson of humanitarianism, tolerance, understanding, help, and rational approach of each party, which should be explained to a wider audience. Therefore, the objective is to try to understand contemporary problems through the prism of past experiences, thus completing the educational function of the historical narrative.”

Refugeeism and Gender in the Shatter Zones of the

Dagmar’s proposed conference contribution contextualises narratives of female refugees in the Alpine and Adriatic borderland territories of Austria, Italy, and Slovenia in the aftermath of the First World War.

By appropriating various sources by and about refugee women and girls, Dagmar’s paper aims to employ a micro-historical approach while investigating transnational ramifications in post-conflict eras and areas. For instance, ego-documents, such as post-war diaries of wives, widows, and mothers, help illuminate the socio-political connotations of military and paramilitary violence, particularly committed in the form of sexual assaults and after armistices. Furthermore, psychiatric files of displaced female civilians – who became admitted to local mental hospitals, due to their traumatic experiences – are pertinent, yet so far much-overlooked records, indirectly chronicling gendered politics in the wake of the Great War. Amidst demobilisation, reconstruction, and nation building in the young First Austrian Republic, for example, questions of citizenship and refugeeism intersected with patriarchal and patriotic notions of femininity, motherhood, and caretaking. Bureaucratic and cultural discourses about the migratory background of dislocated and particularly ‘unchaperoned’ women and girls after the ceasefire hence ideally served as a prism for refugeedom and statelessness in transitional periods. Accordingly, this talk will also focus on and examine the aspect of the so-called Heimatrecht (i.e. residential rights and, more importantly, entitlement to welfare provisions of an individual in a municipality; a legal heritage of Austria-Hungary), in conjunction with deportation, migration, gender, and emotions in motion. 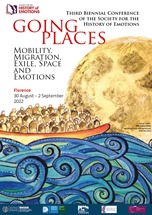