Researcher Dagmar Wernitznig participated at the event  “Reimagining Citizenship in Postwar Europe”, hosted virtually by the
University of Glasgow and George Mason University on 17 and 25 February, (there was another session on 3 March and a final workshop round in the summer). This event will produce a published volume, and her  contribution deals with her research about stateless women and female refugees or DPs, admitted to the mental clinic of the Viennese General Hospital after the Second World War. More about the event here.

Citizenship on the margins – what to do with ‘crazy’ women?

Dagmar’s paper and publication aims to contextualize questions of citizenship at the intersections of gender, statehood, and notions of ‘normalcy’ in post-1945 Austria. Integral part of this analysis are psychiatric files of female patients in the aftermath of the Second World War as pertinent, yet generally overlooked sources for micro-historical approaches towards post-conflict nation building. At the nexus of in/sanity, patriarchy, and patriotism, such documents can also shed new light on processes of in- as well as exclusion of certain individuals, especially when of the ‘other’ sex and ‘unchaperoned.’

For this study, women’s psychiatric records from the General Hospital in Vienna for the period from 1945 to 1948 are investigated. Particularly many displaced persons and refugees from Eastern and South-Eastern Europe, who had experienced trauma during the Second World War, ended up on this psychiatric ward. Hence issues of statelessness in conjunction with social benefits were still implicitly filtered through the prism and previously abolished concept of Heimatrecht as well as Third Reich ideologies and notions of ‘alien and inferior others.’ Equally, such mental asylums also frequently served as a confine for female human beings who defied ‘regular’ classifications. As the narratives of these medical charts reflect more than simple anamneses or diagnoses, they will be specifically discussed regarding the political reconstruction of society – not from a military or socio-economic point of view, but by dealing with aspects and images of ‘normative’ citizens.

Archives of the Invisible. Women in the press in Varadar Macedonia in the interwar period 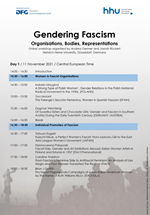