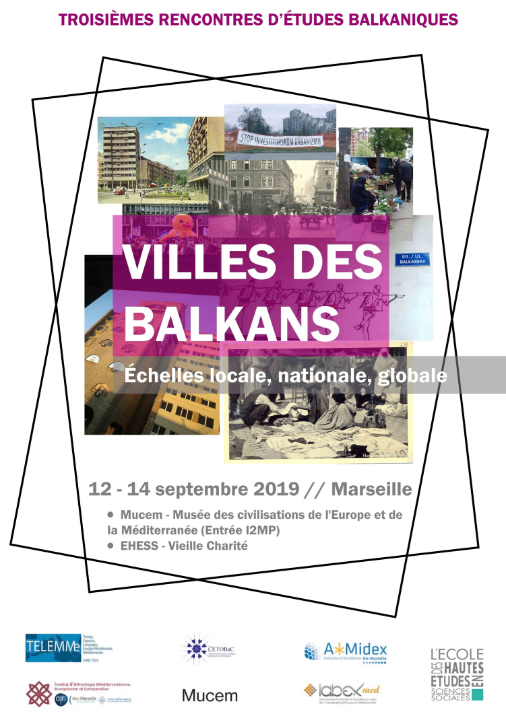 In 2019, as in the previous editions, the Third Balkan Studies conference has taken place, in Marseille, hosted in the premises of the Museum of European and Mediterranean Civilizations (MUCEM). With the aim of relaunching the French Association of Balkan Studies (AFEBalk – Association Française d’Études sur les Balkans), the conference pursued the idea of opening a space of dialogue for the scholars based in the French-speaking countries and beyond. The previous edition of the conference, held in 2016 and titled “In search of the Balkans: Between Europe and the Mediterranean”, had addressed the question of how to locate the region in respects to other macro-areas. The 2019 edition of the conference aims at gathering together different disciplines such as history, anthropology and geography to trace past legacies and new trends in the urban space. The inclusion in larger supra-national states has contributed to turn Balkan cities in peculiar territories characterized by national, administrative and cultural features different from the surrounding countryside. In this respect the many similarities between the post-Ottoman and post-Hapsburg cities have been repeatedly stressed. In both the interwar period and the post-WW2 era, new projects of modernization invested the urban centers in an attempt to use the urban space – especially in capital cities – as a showcase to deliver political messages of state building. The turbulent events of the 1990s similarly left deep traces on cities, as borders, political regimes, national affiliations changed, but also the previous dwellers were often replaced by newcomers. However, cities were not just passively affected by external events but rather displayed a high degree of subjectivity testified by campaigns and protests against the authorities, new cultural and political initiatives, grass-root activism. Therefore, the urban centers provide a testing ground for studies, drawing on different scales, from micro-history (with a focus on a small area or portion of the city) to national and global history. Some of these topics were pointed out in the opening sessions in which Catherine Horel invited to imagine cities as texts to be cyclically erased and rewritten.

The many panels of the conference, taking place simultaneously, elaborated upon some of these topics. Some of them engaged with reflections including innovative combinations of concepts ranging from ethnography to musicology. Migration, everyday practices and gender issues have been investigated in a diachronic perspective and focusing on specific time frames. The city has also been addressed as a space of monumentalization in which the political establishment implements its own projects and a fertile ground for cultural production in which the inhabitants create significance for the city. Popular culture has been central to a panel which has included different cultural products throughout the entire 20th century from press, to music, movies, sport and comics. Historical legacies and abrupt changes have been investigated both from the top-down and bottom-up approach. A gendered view on the urban space, besides emerging in many panels, has been addressed in a specific panel. The post-conference activities have included an extra-academic presentation on LGBTQ activism in the Balkans and in Lebanon and the projection of a documentary movie on the occupation of cinema Zvezda in Belgrade, building upon the issues of civil rights, commons, and activism.

The Third Balkan Studies conference has provided fresh and fascinating insights into urban studies on Southeast Europe and fostered the dialogue among different disciplines and historiographies, pointing at the numerous synergies. 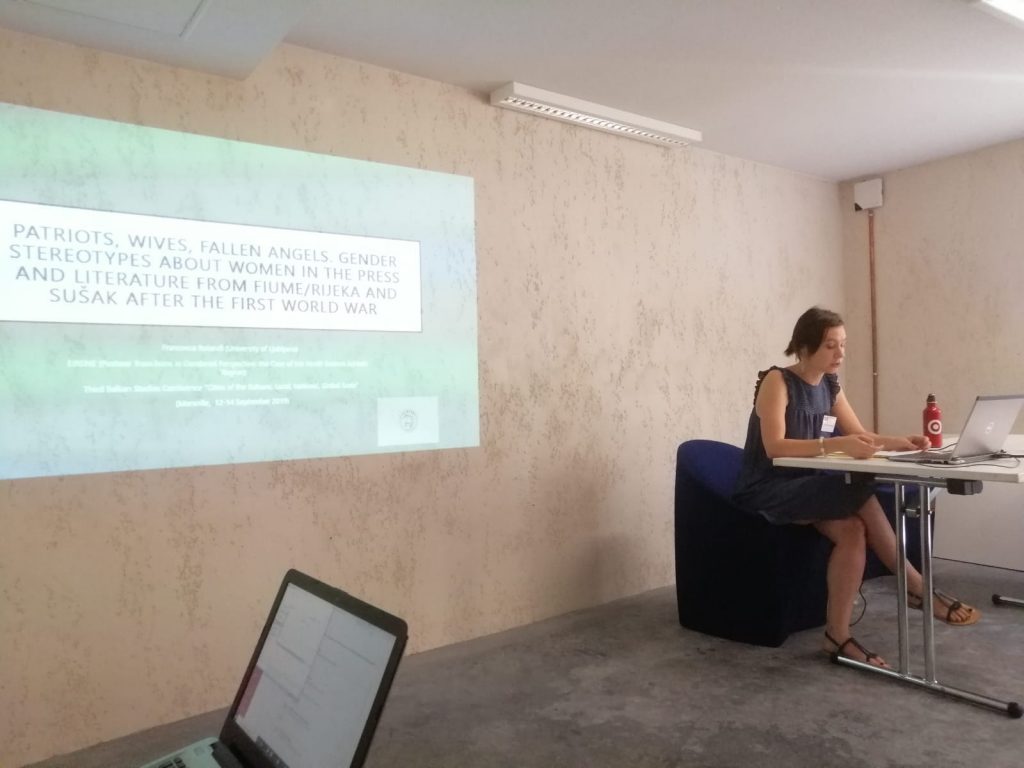 Patriots, wives, fallen angels. Gender stereotypes about women in the press and literature from Fiume/Rijeka and Sušak after the First World War

Claimed by both Italy and Yugoslavia in 1918, the multicultural city of Fiume/Rijeka experienced a troubled transition period in the aftermath of the First World War which lasted until its annexation to Italy in 1924. The bordering city of Sušak, divided from Fiume by the river Rječina, was fully integrated into the Kingdom of Serbs, Croats and Slovenes in 1923, after the end of the Italian military occupation.

The Italian National Council, which seized the power in Fiume in the late 1918, granted women the right both to vote and stand for the elections, despite regarding it as a concession. D’Annunzio expedition and the newly established Regency of Carnaro combined an emancipatory discourse with a narrative focused on “masculinity” and the cult of violence, both reassessing gender rules and perpetuating a patriarchal view of family. Universal suffrage and political participation became issues of debate also in the north-west corner of the Kingdom of Serbs, Croats and Slovenes. Despite being increasingly marginalized on the political scene, women maintained an active role in the society, taking part in local organizations and philanthropic activities, participating in the labour market, and challenging established social norms. Moreover, on both the sides of the river Rječina women experienced the consequences of the war, the impact of the changes of borders and political systems, and the climate of violence which reached its peak in 1922-1923.

By presenting the preliminary finding of a research conducted in the framework of the ERC project EIRENE (Postwar transitions in gendered perspective: The case of the North Eastern Adriatic Area), the paper will address gender stereotypes about women in the local – strongly male-dominated – press and literature from both Fiume/Rijeka and Sušak.