Dagmar was invited to the annual NISE Conference, hosted from 28 to 29 May at the German Historical Institute in Warsaw and entitled, “The politics of difference in 1919 Europe: Minorities and border populations”. The acronym NISE stands for National Movements and Intermediary Structures in Europe, and NISE (www.nise.eu) is an EU project, similar to EIRENE. 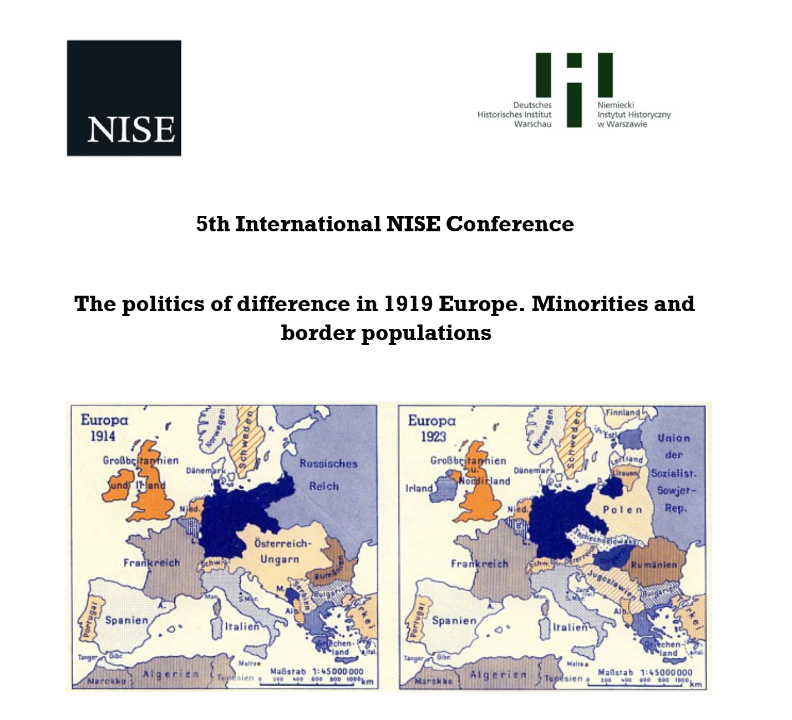 Here is a synopsis of Dagmar’s talk:

Dagmar’s paper aimed to unpack European plebiscites in conjunction with minorities issues after the First World War from a trans/national perspective by interfacing Sarah Wambaugh’s work on this subject as an expert adviser for the newly founded League of Nations. For instance, Wambaugh’s investigations into this matter for the Versailles Peace Conference were published in 1920 as Monograph on Plebiscites, with a Collection of Official Documents, followed by many other titles on the topic, such as La Pratique des plébiscites internationaux (1928), Plebiscites since the World War (1933), and The Saar Plebiscite (1940).

With the increasing implementation of universal suffrage in several countries, the interwar period in Europe witnessed a number of plebiscites about territorial disputes, most prominently perhaps in the Saar area in 1934–35, and Wambaugh managed to craft an international career as an extra-governmental, global observer and analyst of these referenda for the League as one of the few women in diplomatic fora at that time. Dagmar’s talk focused especially on the narrative of the 1920 Carinthian plebiscite with its ethnic, socio-economic, linguistic, cultural, or religious ramifications, and Wambaugh’s appropriation of it for geo-political – most notably US – interests and agendas in these regions and beyond, particularly pertaining to the ideological fight against Bolshevism.

On the Austrian territory of the former Habsburg Monarchy many plebiscites in the years immediately after the Great War were conducted, first and foremost in Carinthia in 1920, followed by the Burgenland in 1921 and preceded by an unsanctioned referendum in Vorarlberg in 1919, and Wambaugh traversed these places, conducting field studies in 1922. A southern province of Austria, Carinthia, to this day, has a mixed German- and Slovene-speaking population, with the Slovene minority amounting to circa 25% in 1920, mostly residing in the border areas to Slovenia. After the partial usurpation of these borderlands and the Carinthian capital Klagenfurt by forces of the Yugoslavian Kingdom of Serbs, Croats, and Slovenes at the end of the First World War, a plebiscite, commissioned at the Paris Peace Conference of 1919 and by the Treaty of Saint Germain, was held on 10 October 1920 with 59.04% (22.025 votes; approximately half of which were Slovene-speaking) of the Carinthian constituents opting for Austria. Within the context of implemented Germanification and assimilation by Carinthian officers and bureaucrats, these pro-Austrian voters of Slovene descent were derogatorily classified as Windische and hence the ‘good aliens’, prone to integration, whereas those choosing Yugoslavia became characterized and stigmatized as ‘enemies of the state’. One such administrative representative was the historian and future NSDAP-member Martin Wutte (1876–1948), rigorously employing and reinforcing this dichotomy of stereotypes and, incidentally, also corresponding with Wambaugh, while lobbying in Vienna for her award with the so-called Knight Cross, first class, an Austrian order of merit, which she finally received in 1935. Based on archival research regarding the Wambaugh Papers at Harvard’s Schlesinger Library as well as material unearthed in the local repository in Klagenfurt, Dagmar attempted to highlight intersections and gender complexities of nationalities questions, post-conflict politics, and topographies of populism, also reverberating through to the 21st century.

Contribution to Research of Girlhood after the First World War: an example of Girls with Mental Disorders from rural areas of Continental Croatia