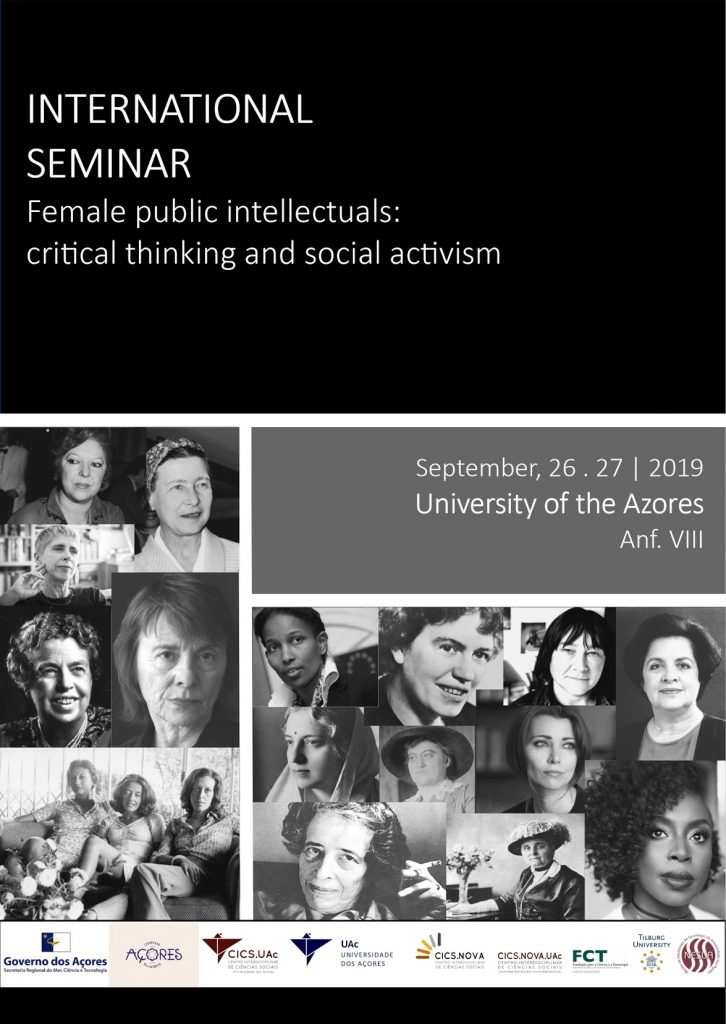 Researcher Dagmar Wernitznig  attended the international seminar “Female public intellectuals: critical thinking and social activism”, which was  hosted at the Univeristy of Azores, Portugal, between 26 – 27 September 2019. She participated with her paper, titled ‘Woman of the world but without a country’: Rosika Schwimmer (1877–1948), First-Wave Feminism, and the Gendering of Public Discourse.

‘Woman of the world but without a country’: Rosika Schwimmer (1877–1948), First-Wave Feminism, and the Gendering of Public Discourse

[I]f there is any principle of the Constitution that more imperatively calls for attachment than any other it is the principle of free thought—not free thought for those who agree with us but freedom for the thought that we hate.

This paper aims to unpack the complexities of the so-called first-wave feminist movement as a pioneering intellectual and public campaign of female individuals generally and Rosika Schwimmer’s transatlantic activism for emancipation and peace specifically.* For instance, the fight for woman suffrage is today recognized as pertinent for raising and transforming the sociopolitical consciousness of discriminated groups, yet reformers for the female franchise have rarely been regarded as public and intellectual figures by their (male) contemporaries.**

Originally from Hungary and later a stateless alien in the United States, Rosika Schwimmer exemplified many character traits of her first-wave feminist peers by attempting to introduce germane paradigm shifts regarding the perception, legal treatment, and cultural economic infrastructures of gender. In 1915, for example, she helped found what later became known as WILPF (Women’s International League for Peace and Freedom) and thus did not simply anticipate peace-making processes of the short 20th century, but also established a feminist counterpart to the still very masculine dominated United Nations. With her pathbreaking naturalization case in the United States of the 1920s, again, she facilitated public debates about citizenship as well as its connotations, which reverberate through to the 21st century and aspects of globalization or migration. Accordingly, the talk attempts to illuminate interfaces of gender and politics within platforms of the public versus the private.

*Born 1877 in Budapest into a secular Jewish household, Schwimmer attained a prominent role in the Hungarian women’s movement of the fin de siècle. Multilingual and a gifted public speaker, she also productively liaised with the International Woman Suffrage Alliance (henceforth IWSA), organizing its seventh congress in Budapest in 1913. At the outbreak of the First World War, she held the post of corresponding and international secretary for the IWSA and their journal Jus Suffragii in London. Throughout the war, Schwimmer remained one of the most ardent peace proponents, igniting the foundation of many peace groups and parties, such as the Woman’s Peace Party, on her lecture tour for an armistice in the United States, playing a pivotal part at the International Congress of Women in The Hague in the spring of 1915, and conceptualizing the subsequent women envoys to neutral and belligerent states. In her relentless pursuit for continuous mediation and stop-the-war-at-any-cost efforts, she found herself increasingly alienated from former mentors or confidantes and ostracized as a subversive element by the general public. Largely haunted by a reputation for being excessively autocratic and egocentric, her negative image consolidated during the ill-fated Ford Peace Ship, which she was crucial in designing. After serving as one of the first (unofficial) female diplomats of modern times in Switzerland and her adventurous escape from Hungary under Horthy, she emigrated to the United States, where she fought (and lost) an emblematic naturalization case and colaunched the so-called Campaign for World Government and World Citizenship with the social activist and Texas heiress Lola Maverick Lloyd (1875–1944). In the 1930s, Schwimmer was also instrumental in originating the project of the so-called World Center for Women’s Archives, spearheaded by the historian Mary Ritter Beard. Shortly before her death in 1948, Schwimmer was nominated for the Nobel Peace Prize.