Guest lecturers and project members presented intriguing lectures. The workshop was organised into panels. First we started with a welcome speech by Roman Kuhar, Dean of Faculty of Arts and a presentation by prof.dr. Marta Verginella,  project’s principal investigator.

Gendered Violence and Trauma in the Twentieth-Century Post-War Periods

Marta Verginella‘s remarkable introductory lecture pointed out intriguing perspectives, which stemmed from referential authors in the field, but also reflected her own conclusions, observations and familiarity with the North-Eastern Adriatic Region. She addressed the transitory period between wartime and peacetime societies, which had often been marked by extreme violence, a consequence of weakened state institutions, the collapse of war-economy relations, deficient social conditions and frustrated society in general. Women also experienced their post-war violence, also it’s gender-specific forms, but have usually been omitted from historiographic analyses. Although juridical attitudes over violence inflicted on women changed over time, traditional social reactions on gender-based violence remain rather durable. However, Verginella called for a holistic understanding of post-war violence, for – referring to sociologist Marina Blagojević – a perception of women solely as victims not only conceals the entirety of their social responsibility but also diminishes the importance of their citizenship.

Violence against women in post-war years. The feminist point of view

In her fascinating keynote lecture Bruna Bianchi has dealt with the topic of violence against women during the Great War as well as its post-war conceptualization in feminist circles. Bianchi referred to a large range of issues, from the use of rape as a weapon of war to the instrumentalization of women’s body. In the aftermath of the war both European and US feminist engaged themselves in several campaigns against social and legal issues not strictly arising from – but related to – the war such as child marriage, white slavery but also the loss of citizenship upon marriage. In the wider struggle for gender equality, some feminists advocated women’s right to birth control, actively challenging pro-natalist policies implemented in many countries. After offering an exhaustive overview of the European context, Bianchi moved on with the US one with a specific attention for the strategies of resistance – such as the refusal of motherhood – of the Afro-American women whose everyday life was deeply affected by violence even after the abolishment of slavery.

PANEL 1 – The 1990s: Between Stigmatization and Empowerment

The first panel presented a very interesting comparison between two paradigmatic cases, where rape had been used as a weapon of war: Srebrenica in Bosnia and Herzegovina (1995) and Kosovo (1998-99). Two events that, although close in time and space, have led to different re-elaborations, as a result of the different social context and the representation of women victims of violence.

Anna Di Lellio spoke about how predominantly familial sphere creates necessary social context favourable to listening and denouncing the experienced violence. Di Lellio analysed how art in the transitional phase servers to connect different social realities and gives a sense of justice by making the victims visible. Emblematic case is the project by the artist Alketa Xhafa-Mripa, set up in the stadium of Pristina in 2015, where 5,000 clothes were exhibited to remember women being raped during the war, which saw the participation of Kosovan society as a whole.

Nena Močnik pointed out how the representation of the “Mothers of Srebrenica” have helped to perpetuate the stigma of rape, presenting women only as victims because they have lost their husbands or sons. Even today, the discourse on rape is centred on a patriarchal vision of motherhood. To dismantle this narrative, Močnik analysed the interviews she conducted with women, who had three different experiences of motherhood: before the rape of war, as a result of rape, and years after the violence occurred. The concept of motherhood has changed, has been lived and told in different ways, depending on the individual experience, but also on the social and national context.

PANEL 2 – From Particular to Massive Perspectives of Violence

The second panel offered two interesting lectures, dealing with the period after World War II. William Mikkel Dack pointed out the reasons why scholar investigation of sexual violence committed against German women in the final stages of the war remains understudied (scarcity of first-hand accounts, public silence about the crimes, politicized post-war reality). He also presented an important, but overlooked source, the political questionnaires (Fragebögen), which was part of Allied denazification efforts, serving to elicit anti-Nazi activities and sentiments. To many German women filling in the questionnaire was the opportunity to record personal experiences of sexual violence. Dack showed how such a rich repository of autobiographic accounts offers interesting insights into the study of physical violence (and psychological ramifications) against women in the occupation years (1945-1949). On the other hand Gorazd Bajc presented an analysis of primary sources kept in the British, Italian and Yugoslav Archives showing victims of post-war violence in numbers. He pointed out two cases of violence against women in Trieste in the first period after the World War II and demonstrated the impact of such events on the Slovene and Italian population by taking into account the controversies by the Italian-Yugoslav border.

PANEL 3 – Behind the Curtain of Insanity

The third panel presented impressive findings related to the examination of the psychiatric files in post-war periods from Klagenfurt, Austria, and from Zagreb and Pakrac, Croatia. Contextualized in certain features of psychiatric development, yet focused on the Carinthian perspective, Dagmar Wernitznig analysed medical files of the female patients not only in light of their psychiatric diagnoses, but also attempted to reconstruct the attitudes of the medical staff towards patients. Her presentation, addressing transitional periods after both World Wars provided many interesting standpoints for further analysis of the post-conflict psychological consequences upon individuals, and also reflected an extremely turbulent demographic reality of post-war era, whose common denominator related to violence during wartime and radical socio-political changes after the war. Jelena Seferović on the other hand focused on the mental disorders of the war veterans of the Great War from rural parts of the central Croatia. Many former soldiers developed mental illness and also abused members of their families, in particular wives, who often had to seek psychiatric help as well. Seferović also pointed out the discrepancy in the narratives about the same act of abuse between the victim and the perpetrator, revealing some post-war perception of society in terms of gender. Interestingly, in Croatian mental institutions patients usually had to work, which presented a part of the therapy, but also means of cutting down the alimental expenses; it should be emphasized that the quality and advancement of medical treatment often related to hospital’s resources.

PANEL 4 – Outcomes of the Great War: Contextualizing Gender Based Hostilities

Meta Remec began an intriguing panel by providing a graphic overview of gendered violence after the First World War and the multiple forms of abuse that civilians had to endure. She teased out how rape of the female population during and after belligerent conflicts is utilized to humiliate the enemy and how the aftershocks of these transgressions affected the post-war lives of women and girls. For instance, domestic violence of ex-combatants and social stigma or degradation in family environments were additional tribulations, faced by the victims. In the succeeding paper, Matteo Perissinotto, again, looked specifically at physical and political aggression, targeting female human beings in the Julian March in the period from 1918 to 1922. By investigating Carabinieri records and newspaper articles of that time and region, he highlighted violent acts of soldiers, directed towards female citizens, as well as the dire consequences, ranging from infanticide to suicide. Crucial elements, such as the so-called ‘fascismo di confine’ or authorities’ reactions towards perpetrators, were also discussed.  The last talk, given by Tina Bahovec, dealt with the post-1918 border conflict in Carinthia between the Kingdom of Serbs, Croats, and Slovenes and the Republic of German-Austria by focusing on its various gender dimensions. Based on diverse forms of sources, including ego-documents and fiction, she elaborated on brutality, committed against and by women. For example, the female body as a signifier for the nation and territorial claims alike was analyzed with visual aids and imagery. The session concluded with a lively exchange of ideas and thoughts between the three panelists and an engaged audience. 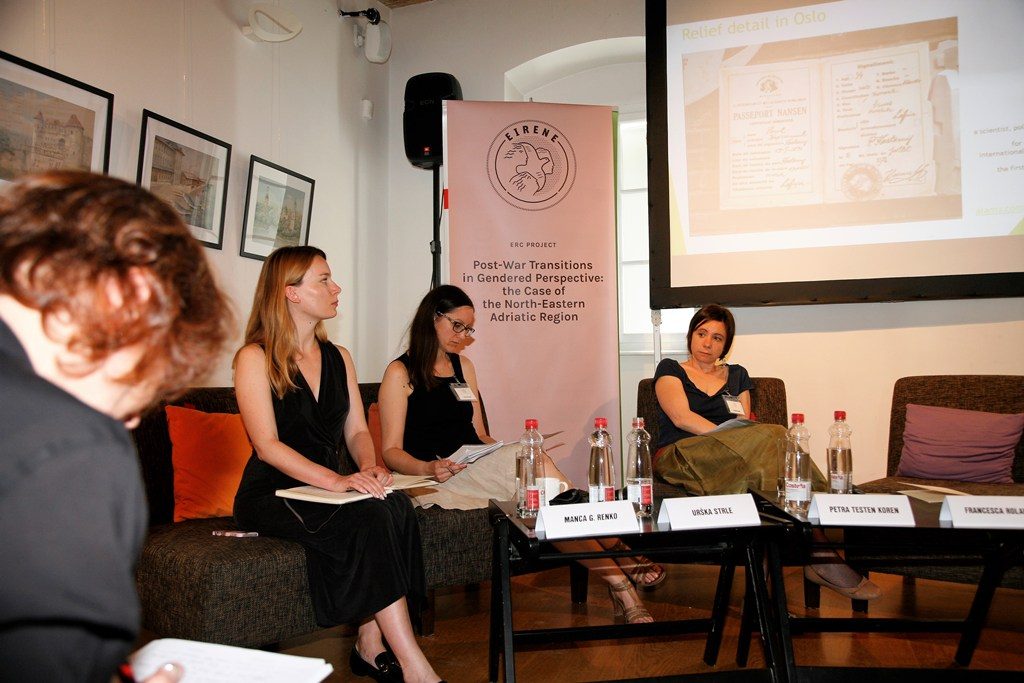 In the last panel Urška Strle, Petra Testen Koren and Francesca Rolandi presented the early results of their current research within the EIRENE project. Although their research has not yet been completed, each of them has highlighted some of the important findings of the work that provoked a debate and a desire to further highlight some of the findings. Strle discussed mobility in the post-war border areas with special focus on detecting refugees in gendered perspective. Testen Koren is currently analysing violence against women as presented in the documents of Archivo di Stato di Gorizia (1919-1921). Rolandi researches violence and transition in Fiume/Rijeka and Sušak after the World War I. 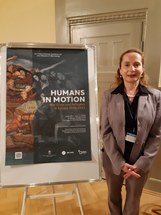